Probably after the official notification for JEE Main was released, students would have familiarised themselves with the eligibility criteria. However, one common confusion that candidates do face is over the State of Eligibility.

Whereas, the state of eligibility criteria is not applicable for the candidates belonging to Nepal /Bhutan/Foreign/OCI/PIO. 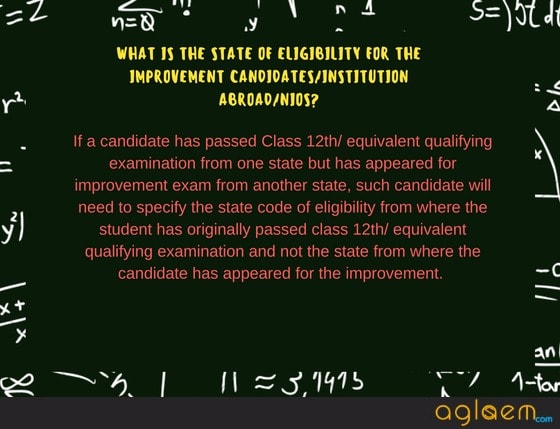 With specifying the State of Eligibility, candidates specifies the state from where which the candidate has studied / will be appearing. The candidates who have passed the qualifying examination from Assam / J&K / Meghalaya will have to provide information related to passport number, ration card number, bank account number or any other valid Govt. identity number. Also, these candidates will be able to select limited test centres in their own state only. Whereas if the candidate selects other than these state of eligibility, for example, Delhi, they will have to provide details related to Aadhar only and can choose exam centres across India.

Another thing to be noted for JEE Main 2018 Registration is the mandatory requirement of Aadhaar Card. The use of Aadhaar for the candidates of JEE (Main) 2018 is mandatory as it will result in the accuracy of the candidate’s details. This move is for the candidate’s benefit only as they will now not have to produce multiple documents in order to prove one’s identity. However, there are few questions which need clarification regarding Aadhar Card. However, it is not a mandatory requirement in case of candidates belonging to Assam/J&K/Meghalaya, as they have not yet been issued, Aadhaar Card.

Students who have recently submitted the request for updating in Aadhaar details (including biometric update) and are unable to apply with the updated Aadhaar Card Details. What should they do?

In such case, the candidates have to apply for JEE (Main) by entering 14 digits Aadhaar Enrolment ID/UR No. (Including slash) printed on the slip issued by aadhaar centre after submitting updation request.

What if the student does not have an Aadhaar Card?

The candidates who have not yet enrolled for Aadhaar, can do so by obtaining the form required to enrol for Aadhar online and then submitting it at centre – or – by visiting any Aadhaar enrolment centre (list available at uidai.gov.in) to get enrolled for Aadhaar. It is a simple process to obtain Aadhaar online. Firstly, fill online application. Next, produce the relevant documents and submit it.

What if the details on the certificate/ testimonials does not match with that in the Aadhaar Card?

In case if the details in the Aadhaar is not exactly similar or not in same pattern as in school records, the candidates should submit a correction request at Aadhaar centre and apply for JEE Main by entering 14 digits Aadhaar Enrolment ID/UR No. printed on the slip issued by aadhaar centre after submitting updation request or they should fill the JEE Main Application Form with old details in Aadhaar card and thereafter can submit a correction request at Aadhaar centre and make the changes at later stage. However, it is advised to make the necessary corrections before hand and not to wait for any last date.

It can be concluded that there are not any severe changes in the eligibility and the registration process. From 2017 onwards, there have been two changes in the JEE pattern:

Srajan Garg Got JEE Advanced Rank 21, Tells You How He Aced JEE