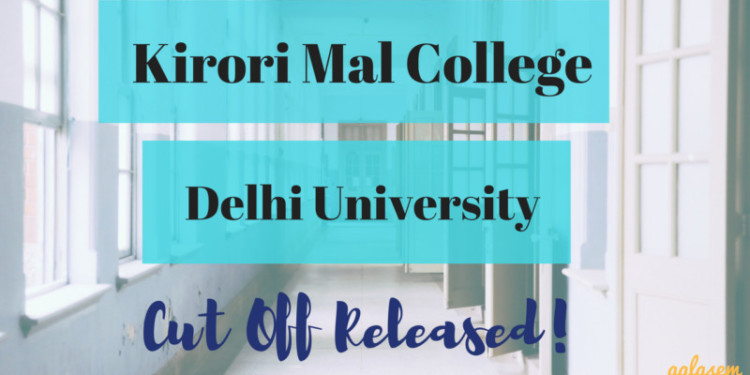 The Kirori Mal College (KMC) has released the first cutoff for admission in the academic year 2018-19. The cut off has been declared after much nail-biting anticipation. This year there has been the marginal rise in the overall cut off of most of the courses offered by the college. Admission in the undergraduate courses of KMC, Delhi University is based on the scores obtained by the candidates in the class 12th boards. With the amazing XII results, the race is going to be tough for this year admission. Candidates having 90%+ marks can only expect to grab a seat in the first round off the cutoff list. The complete Kirori Mal College Cut off is given below. You can check the cut off of individual courses offered by KMC in this article.

This year the highest cut off is 97.75% and lowest being 60% among all category of candidates. For the general candidates, the admission is a tough nut to crack for general candidates in the first list if the percentage is less than 95% in 12th Boards.

The KMC offers 8 B.A. Honours, 1 B.A. Programme, B.Com, and B.Com Honors programme. The cut off has been released for each course separately.

B.A Honours Economics
Last year, the cut off for B.A Honours Economics 97.5%, 95%, 94%, 91%, 93%  and 96 % for GEN, OBC, SC, ST, PWD, and KM candidates respectively. This year, the cut off has been changed slightly as compared to previous year cut off released by the college. The Economics being a prestigious course will continue to amaze students with its high cut off every year.

In Commerce Courses, the B.Com cut off usually crosses 97% for general candidates. This year also it is highest for these candidates with ()%.

Also Check: List of All Delhi University College’s Cut Off 2018

Kirori Mal College offers 10 undergraduate courses in Science. The cut off has been high for these courses as always. The course with the highest cutoff is Zoology and lowest being the Physical Science.