Latest news – As per Punjab newspapers, High court of Punjab and Haryana has issued notice to Punjab DGP and Home Secretary on a petition challenging recruitment to post of constables in Punjab Police. Petitioner had challenged Punjab Police Constable Recruitment 2016 on the ground that four marks have been prescribed for interview which in petitioner’s view is illegal as Punjab Government had already abolished interviews for group C posts.

Admit card of Punjab Police 2016 is released at punjabpolicerecruitment.in.

Punjab Police Admit Card 2016 is being made available at punjabpolicerecruitment.in after 30 June 2016. Also, candidates are getting SMS and emails at their registered phone numbers and email IDs regarding center allotted. For more details of admit card of Punjab Police Common Recruitment Test for Constables 2016-2017, visit the link given below. 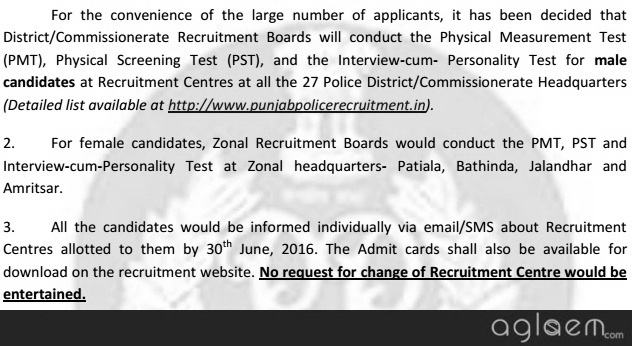 The link to download admit card is available here, or at official website, or is received in your email, you can log in and download the bar coded admit card. Punjab Police Admit Card 2016 is online only and hence candidates must it before the date of PST.

Detailed method: An easy approach is adopted to download admit card of Punjab Police 2016. Here is the detailed step by step on how to download the admit card. Note that these steps are given as of now by taking reference from the online application form and log in pages. When the admit card is released, the final rules for downloading admit card could be updated.

After getting the bar coded admit card, read through details printed on it.

Having downloaded the admit card, you have completed all your pre-exam formalities. After downloading the Punjab Police Recruitment 2016 Admit Card, the first thing to do is to print it out. Print out should be as taken per instructions. Keep print out of your admit card safely.

Long jump: 3.80 meters | Three chances would be given.

High jump: 1.10 meters | Three chances would be given.

Ex-Servicemen; Age less than or equal to 35 years

Walk and run: 1400 meters to be completed in 9 minutes | One chance would be given only.

Walk and run: 1400 meters to be completed in 12 minutes | One chance would be given only.

Long jump: 3.00 meters | Three chances would be given.

High jump: 0.95 meters | Three chances would be given.

This page is being updated with details of Punjab Police Recruitment 2016 Admit Card.

If you have any queries regarding Punjab Police Admit Card 2016 Download at punjabpolicerecruitment.in, please ask in comments below.