Railway Recruitment Board (RRB) has released the RRB Admit Card 2018 ALP for the first stage of CBT exam. No candidates will get their hall ticket/admit card via posts. Thus, they have to download the RRB Hall Ticket 2018 for ALP CBT. To download the RRB ALP 2018 Hall Ticket, we have provided the direct link on this page below. Candidates have to enter their registration id and date of birth to download the admit card. After downloading the RRB ALP 2018 Hall Ticket candidates have to take its print out and carry it on the day of the examination. On the admit card they will notice space to write “self-declaration”, “Signature”, and “Left thumb impression”. Keep these spaces blank and fill them at the exam centre.

5:05 PM: It is expected that RRB Hall Ticket 2018 for Group D will be issued in a short while. As per media reports, exam for Group D could be in September.

3:40 PM: This is to inform RRB ALP and Technician 2018 (CEN 01/2018) applicants that RRB ALP Admit Card 2018 can be downloaded from Railway Recruitment Board official website login as per schedule given below. The date from which one can download ALP admit card are as follows. 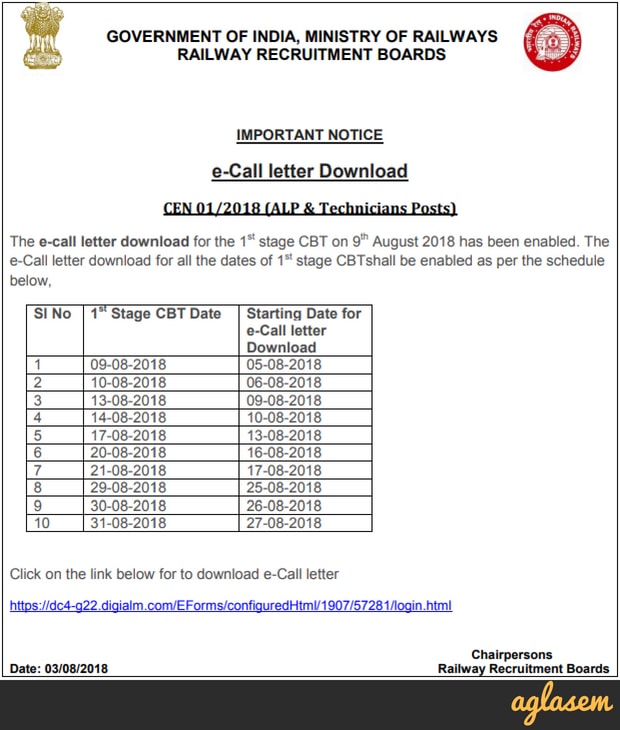 To download the admit card of RRB ALP 2018 CBT exam, candidates must follow the steps below for an error free process:

Do remember the points below: 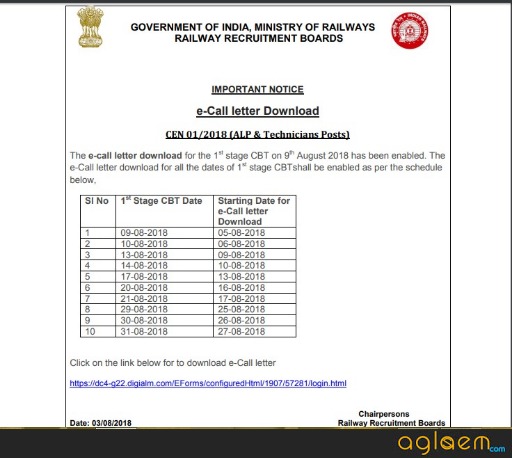 Stage 2: Qualifying candidates will go for the second stage of CBT examination.

Stage 3: Next, the candidates who will qualify ill appear in a Computer Based Aptitude Test (CBAT).

Here is how the distribution of questions will be in the Computer Based Test for RRB ALP 2018.

Given below are links of each Railway Recruitment Board. Candidates can navigate to these to download hall tickets too.

Candidates can also download the RRB ALP Admit Card 2018 from the above links.