RRB ALP Result 2018 – Railway Recruitment Board is expected to announce RRB ALP Revised Result on 26 Nov 2018. Initially, RRB ALP Result was published on 02 Nov 2018. However, due to discrepancies in answer key, the boards have decided to publish revised result. List of candidates shortlisted for second stage CBT are published on official websites. Official notifications are also put up regarding RRB ALP CBT 1 Result 2018, RRB ALP CBT 2 Exam Date 2018. Result of RRB ALP 2018 indicate actual marks, normalized score, status of qualification on basis of their merit and post preference. Qualified candidates will be able to download admit card for CBT 2 from websites of respective RRBs for exam scheduled to be held from 19 Nov 2018 onwards. Check here all details related to RRB ALP Result 2018 including date, cut off, vacancies, CBT 2 exam date, and other information. 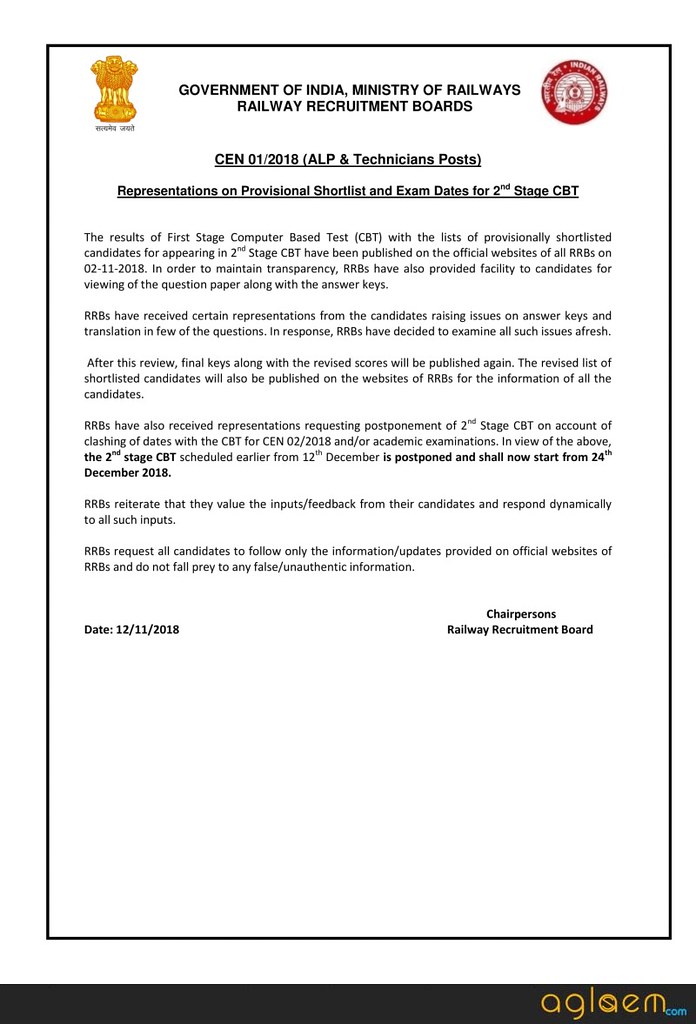 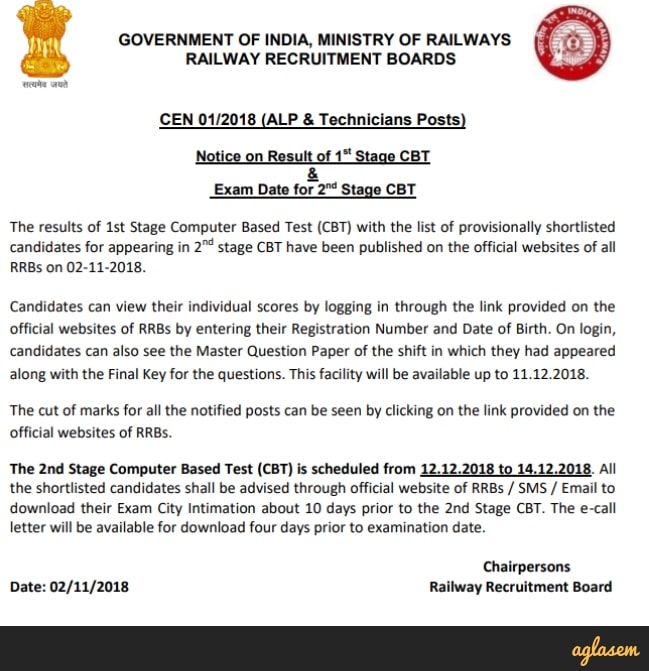 Overall 47.56 lakh candidates had applied for RRB ALP and Technician (CEN 01/2018) Recruitment. Declaration of RRB ALP Result 2018 shall happen for all stages of selection. They are.

Only 20% of the candidates who have appeared in CBT 1 have been declared as qualified for CBT 2. They are shortlisted only on basis of performance in exam. Marks are calculated as per final official answer key issued by the board.

How to check RRB ALP Result 2018 without Roll Number or Registration Number?

If a candidate has lost or forgotten registration number or roll number, then it can be easily retrieved. One can do so by following steps below.

By Admit Card – Check your admit card of CBT 1. It contains roll number.

By Application Form Printout – Candidates were advised to take a printout of application form after filling it. It contains registration number.

Candidates can check RRB ALP Result from websites of participating RRBs and this page. Now that result is out, they have been updated here. Steps to check result are as follows.

Case I – RRB ALP Result published in the form of a merit list.

Or, above two steps can be skipped and one can directly click on result link of this page.

Or, skip above two steps and click on the link to check result given on this page.

Candidates who qualify RRB ALP and Technician 2018 CBT 1 will be able to appear in second stage computer based test. Railway Recruitment Board has published exam trade syllabus for it.

RRB ALP and Technician Cut Off 2018

Candidates must obtain marks equal to or more than RRB ALP Cut Off 2018 in order to qualify. Stage wise cut off are as follows.

Computer Based Aptitude Test (only for ALP)

Candidates can also take a look at past year RRB ALP and Technician Cut Offs from map below. 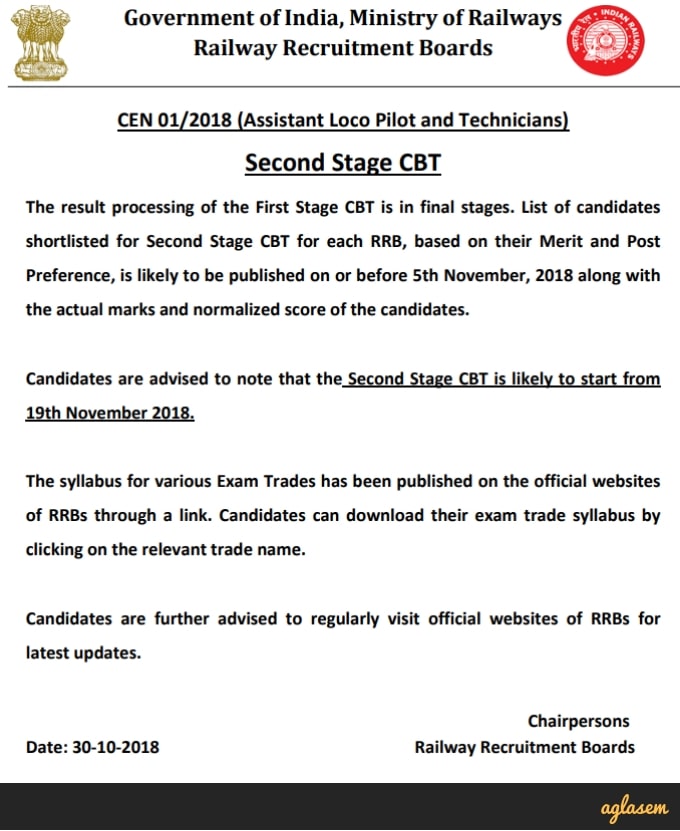 Here are all the figures pertaining to RRB ALP Result 2018. 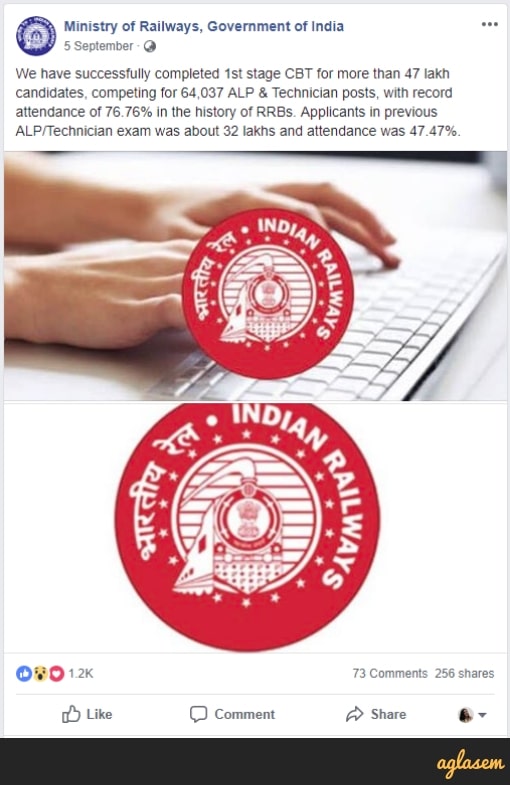 The revised vacancies are

Level 02 of 7th CPC Pay Matrix with initial pay of Rs 19,900/- plus other allowances as admissible.

Marks obtained in RRB ALP 2018 CBT 2 shall be as per formula similar to CBT 1.

Check Here: Link to check RRB ALP Result 2018 of CBT 2 will be available in January / February 2019. As soon as result is out, you can check it here. There will be two parts in the exam namely Part A and Part B. Part A will have 100 questions on Mathematics, General Intelligence and Reasoning, Basic Science and Engineering, General Awareness on Current Affairs. Part B will have 75 questions on trade syllabus as per DGET which is now available for each trade at above link.

Candidates must obtain marks equal to or more than 42 in each test battery to qualify. However only obtaining 42 does not mean one is selected, it only means that they will be considered for further merit listing.

There is no negative marking in computer based aptitude test.

Marks obtained in CBAT will considered for merit list.

For Technician: Candidates shall get a position in merit list on basis of marks obtained in Part A of CBT 2.

RRB wise merit list, final result, selection list, and wait list will be published. Candidates who are in selection will get first preference for recruitment. However if vacancies are not filled by them, for whatsoever reason, then candidates in wait list will be considered.

If you have any queries regarding RRB ALP Result 2018, please ask in comments below.