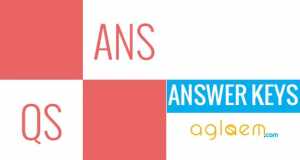 The following is given based on inidvidual assessment of the exam and inputs from various candidates. The analysis does not reflect final official cut offs, and is only for reference

The paper had 50 questions in each section. Overall it was a moderately difficult paper. Section wise analysis of the Combined Graduate Level exam conducted by Staff Selection Commission is given here.

Please note that the analysis is based on various factors and inputs for the exam held on 9th August, 2015. This may be altered after the exam on 16th August. The cut offs are expected only, not final.

As per most candidates who appeared for the test, this section was quite easy. You can see here the distribution of question types in the paper.

SSC CGL 2015 Tier 1 exam had mostly static GK questions in this section. Some were on current affairs.

Arithmetics was the dominating topic in SSC CGL 2015 Tier 1 quant section. That, and Geometry made the major chunk of this section.

If your vocabulary and grammar is strong, you could have well scored here. Questions were asked on antonyms, synonyms, idioms, one word, fill in the blanks.