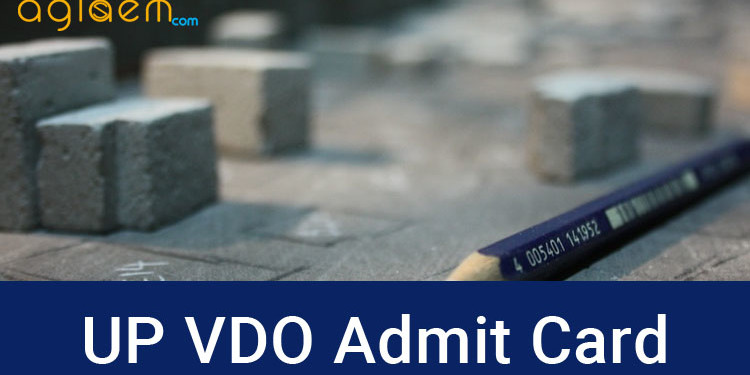 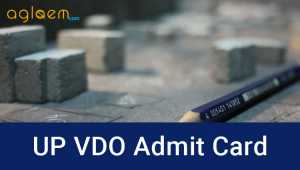 UP Gram Vikas Adhikari Admit Card 2016 can be downloaded from the website of UPSSSC. UP VDO Admit Card 2016 is issued to such candidates who have submitted their application forms as per schedule. 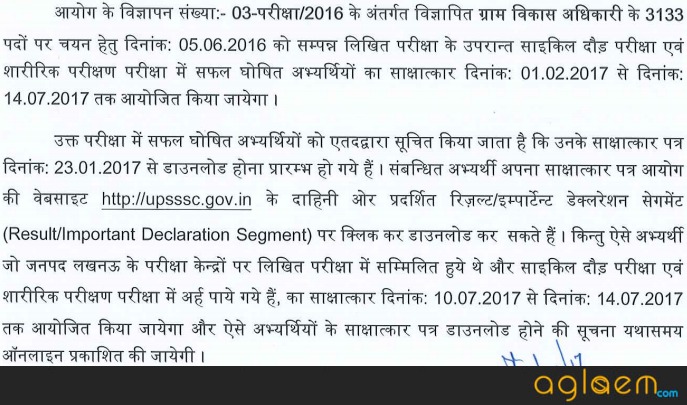 Admit Card for Gram Panchayat Adhikari Examination, 2015 (Re-Examination) under the Advt. No. 7(3)/2015 going to be held on 04 Dec 2016 at Lucknow. For details please check the notification given below. 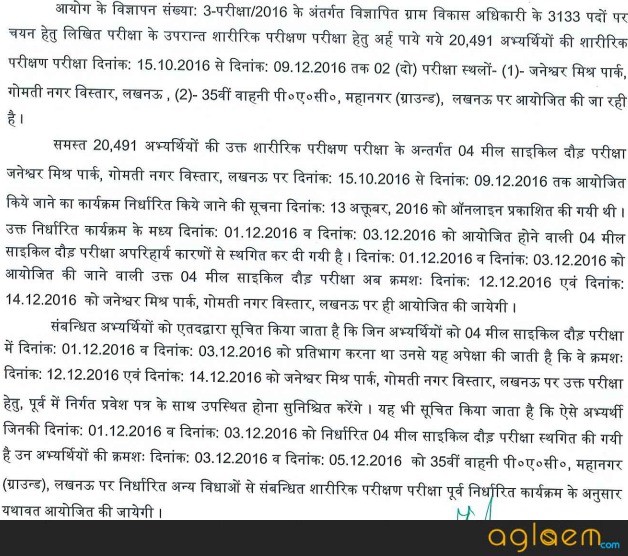 It is anticipated that the Admit Card of UPSSSC Gram Vikas Adhikari 2016 for interview round will be only generated for candidates who qualify the first stage. Written examination and interviews are being held by the Uttar Pradesh Subordinate Services Selection Commission to select suitable candidates for 3133 vacancies for the post of Gram Vikas Adhikari / Village Development Officer (VDO). Get here complete details of UP VDO Admit Card 2016.

Candidate has to login using certain credentials in order to download the hall ticket. The following data should be entered correctly to get the admit card of UP Gram Vikas Adhikari 2016 Recruitment.

List of shortlisted candidates for PET 2016 has been published. Candidates can check their name in the list on the official website or by a direct link that is posted on this page below. 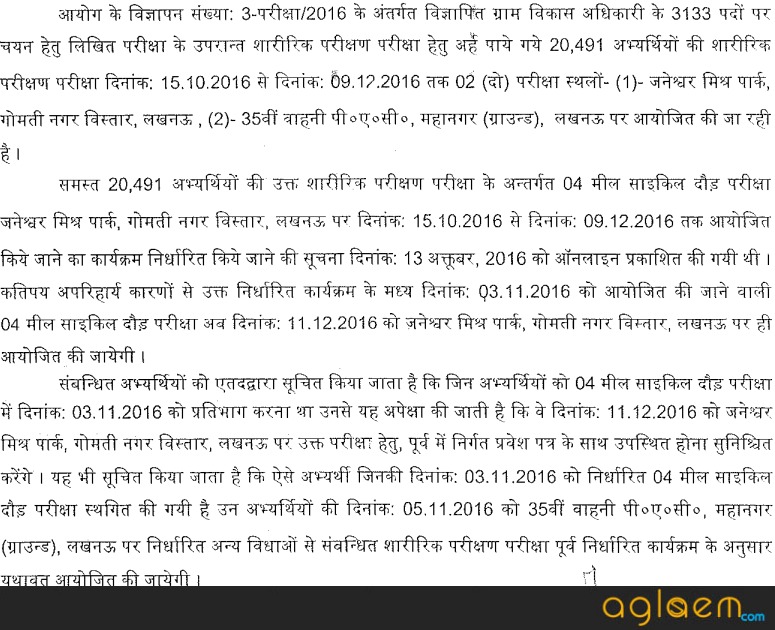 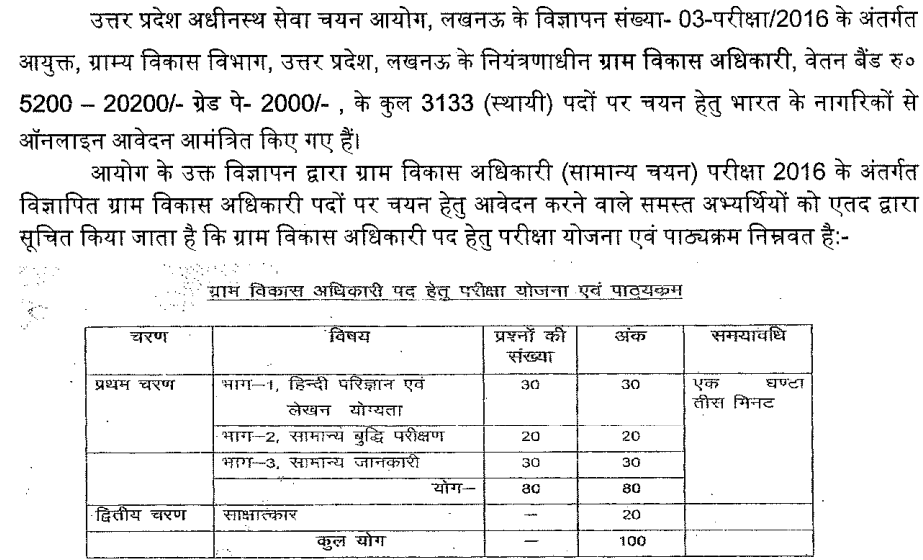 Candidates may please note that insofar exam date of UPSSSC VDO 2016 recruitment written exam has not yet been announced. Admit cards are usually released by UPSSSC around two-three weeks before the exam. Considering the last date of form submission, the above expected dates are given. Actual dates will be known and updated as soon as UPSSSC announces VDO 2016 exam dates.

Uttar Pradesh Subordinate Services Selection Commission (UPSSSC) Lucknow notified via advertisement 05-exam / 2016 the recruitment of Village Development Officer (VDO) or Gram Vikas Adhikari for 3133 vacancies. VDO recruitment exam 2016 will be held on (date yet to be announced) at the date and time published in candidate’s hall ticket or call letter. All the candidates can download UP VDO admit card 2016 from the official website of the commission from date advertised in the notification.

The upcoming events related to admit card release are given below.

UPSSSC releases admit cards online at the official website. To download admit card of UP VDO 2016, candidates can follow the simple steps given below. Before proceeding to download the hall ticket, details such as registration number, date of birth should be kept handy as they will be required in the process.

Link to download call letter will be notified on the home page of official website of UPSSSC. The same will be updated here as soon as the hall ticket is released.

Or, go to the official website and locate the “Important News and Alerts” section. There you will find the link for pravesh patra of Gram Vikas Adhikari (Village Development Officer) recruitment 2016 exam admit card.

Enter candidate registration number, date of birth, gender, verification code. All the details entered on this page should be exactly same as entered in UPSSSC application form.

On entering the details in the download call letter page, the admit card of UP VDO 2016 is generated. Download and print the call letter on a plain white sheet of paper.

About the selection process – Selection for the post of Uttar Pradesh Gram Vikas Adhikari / Village Development Officer will be on the basis of written exam, physical efficiency test, interviews. Candidates who obtain marks more than the UP VDO cut off will be called for physical efficiency test involving running, exercises, long jump, cycling, and walking. Qualified candidates who clear the physical round will be called for interviews. UP VDO Result 2016 for each stage will be published separately.

UP VDO Admit Card 2016 for exam, physical efficiency test, interview are released by the Uttar Pradesh Subordinate Services Selection Commission. Candidates are adviced to check the UPSSSC official website and this page at regular intervals regarding download of admit cards.

Exam pattern of UP VDO 2016 will be notified by UPSSSC. The UP VDO 2016 exam date and admit card notifications will be accompanied by details of examination pattern and syllabus. UP VDO exam pattern 2016 will highlight the subjects on which questions will be asked in the paper, marking scheme, time duration of exam and other details. Looking at past few years recruitment exams, it is expected that question paper will have questions on the following.

Candidates may please note that insofar exam pattern of UP VDO 2016 has not been announced. The subjects mentioned in table above are as per last UPSSSC recruitment, and may change this time. Exact subjects, number of questions and marks will be updated once the UP VDO 2016 recruitment exam admit card and pattern notification is published by UPSSSC.

UP VDO Result 2016 will indicate the list of candidates who qualify the written exam. Such candidates have to prove their physical standards. There will be tests on one mile running, physiocal exercises, long jump, four miles cycling, two miles walking.

Check result of UP VDO 2016 online at upsssc.gov.in. UP VDO result 2016 declaration dates will be decided by the Uttar Pradesh Subordinate Services Selection Commission. As soon as the result is declared, notification for the same will be updated on the website. Candidates can check result roll number wise, or registration number wise. There are two options made available to check results, as explained below.

This page is being updated with details of result of UP Village Development Officer 2016.

If you have any queries regarding UP VDO Result 2016, please ask in comments below.