CAT exam is a big deal for MBA aspirants. It is a gateway to the best B-Schools in India, and scoring a 99.9+ percentile is modern day Herculean task. So how did Nikhar Mattu get 99.92%ile? Did he study day and night? Did he refer to some specific books for CAT preparation? What was his preparation strategy?

Aglasem correspondent Pranjali Rastogi bombarded Nikhar Mattu with these, and several more questions on how to score well in CAT, and he graciously responded to each with excellent, enlightening answers.

Check out this CAT Topper interview to give your CAT preparation the right direction! 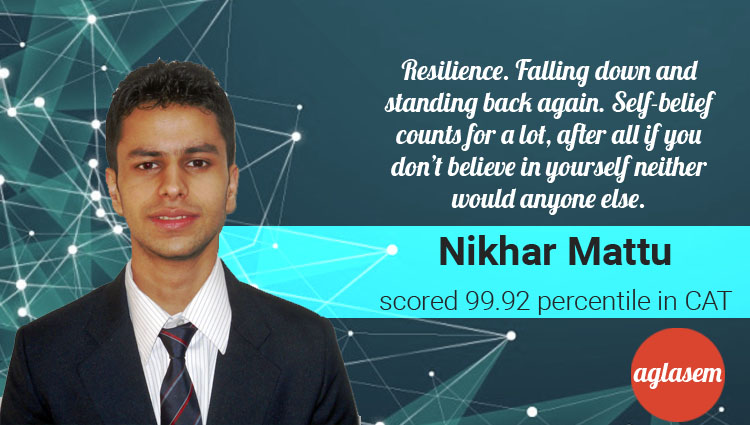 Nikhar Mattu was born and brought up in Shimla. He moved to Delhi to pursue B.Com. (Honours) from Delhi University.  He is currently working at the Royal Bank of Scotland (RBS).

Share your feelings after cracking the CAT 2015 Exam with such a good percentile.

When I actually found out the results I just yelled out a lot of expletives, possibly because I was expecting somewhere around 99.1-99.2 (best case scenario) and so 99.92 was a very pleasant surprise.

At the same time I knew, having gone through the second stage last year, that there’s a long road ahead and I must put my best foot forward. And that’s what I feel right now as well. That it was a nice thing to get a high score but the job is only half done, perhaps less.

What was your favourite section?

My favourite section was the verbal section. Possibly because I had to do nothing to specifically prepare for it, except maybe read a lot, which I would have done anyway.
Towards the end I started to like the DI/LR section too.
But verbal was always my favourite.

What are your plans after MBA?

Pursue a career in either investment banking or hedge funds. Probably hedge funds. It depends on a few factors. So, let’s see.

When did you start preparing for the exam?

According to you what is the best time to start CAT Preparation?

The best time to start depends on the individual. I know of someone who scored 100 percentile a few years back without any direct prep whatsoever. Final year of college is a good starting point for most. However, I would recommend all future aspirants to maximize their undergrad academic performance simultaneously.

Otherwise, there are n number of individuals with more than 99.9 and no ABC calls and way more with 99.4+ and no calls from any of the top 6 IIMs. So, a balance needs to be maintained.

One can write CAT again but if you mess up your undergrad scores then it’s going to haunt you for a while.

What timeline did you follow to prepare for CAT?

Because both the years I started preparing in June so I simultaneously completed the course and wrote mocks, and of course the number of mocks written per week increased towards the end in both the cases.

With the new exam pattern, what should the preparation strategy be for CAT exam?

It’s always been more or less the same. Do the basics well, write a ton of mocks, analyze them well, revise as much as you can and stay calm on the D-day.

Did you take any coaching class & Mock Test? In your opinion should students take coaching for preparation?

I joined a coaching program but I rarely attended the classes because I didn’t feel I was getting much value out of them. For writing mocks I enrolled for the test series of two mock providers IMS and CL. I would recommend every aspirant to write the mocks provided by IMS, as many others would attest they are easily the best in the market.

As far as classroom coaching goes, again it depends on the individual.

If someone feels they need structure provided by someone else and they can regularly attend classes and spend 35-50 grand then sure, go for coaching classes. But for anyone who does alright on their own I would recommend purchasing the study material of any of the coaching centres, finishing it and writing anywhere from 20 to 135 mocks. Would save money and time (no pun intended!).

How did you balance your Job and Entrance Exam preparation together?

I was lucky in this department because my job timings were 2:30PM – 11:30 PM so I used the mornings to study. 2-3 hours daily and 4-5 hours on the weekends for 6 or so months this time and a similar amount last year sufficed.

What are the most important topics for CAT preparation that you think a CAT aspirant should focus on?

Also I would like to tell all aspirants that please don’t ignore geometry and please don’t practice questions from number system as if it’s the only topic, a mistake I have seen far too many people commit.

Basics need to be done of all topics and then one can tweak their prep depending on where they stand.
Which books/ study material did you refer to for your CAT preparation?

I studied from the material provided by IMS. Plus I referred to a book titled Quantitative Aptitude for the CAT by Mr. Rajesh Balasubramanian (click here for the book).

I owe a major chunk of my success to pagalguy.com. Amazing site. You get to interact and learn about CAT, MBA, placements, and everything else under the sun from fellow aspirants, ex-aspirants, people who passed out of top b-schools and teachers. There’s a sense of togetherness that really helps, especially when you are going through a rough patch.
Other websites I found really useful are cat100percentile.com and learningroots.in; both run by people for whom I have immense respect.

Apart from CAT, which other MBA Entrance Test you appeared?

I also wrote XAT, the results of which are awaited.

What is your preparation strategy for the upcoming GD & PI session?

Since this is my second time around I have a fair idea. Broadly there are two things to be covered, the HR questions and the technical questions.

But the devil lies in the details. HR questions can include anything from the generic tell me about yourself to weird questions like when was the last time you lied. So, I need to do a lot of soul-searching for this.

For the technical bit, I’ll brush up my undergrad subjects, current affairs and static GK.

What is your success mantra?

Don’t care much for the term. But if I have to say something it’ll be never giving up. Resilience. Falling down and standing back again. Self-belief counts for a lot, after all if you don’t believe in yourself neither would anyone else.
And the realization that this is it. Random events happened for billions of years and because of that we have this wonder called life.
And it could be gone any second.
How can we not make the most of it.
How can we not put everything we have to make it count.

As an advice to future CAT takers, how many questions should one attempt to score well?

As many as one can. Yes accuracy matters, of course it does, but only so far in as it increases your score.  So, provided you have reasonable accuracy, attempt a lot is what I would say.

Any advice to aspiring CAT Aspirants?

Work hard, work smart and never give up. It’s not a very tough exam, it’s just super competitive. Believe in yourself, do the basics and stay calm on the D-day. You should sail through.

On the exam day, what was your experience like?

I got a good night’s sleep and I woke up determined. I knew I had to stay calm no matter what.

I actually thought I could have done a bit better if the screens were bigger and the seating arrangement less cramped but oh well. And as before every exam I write I told myself two things, the first that even if you absolutely screw this up there are a million other things in life (thereby easing pressure) and the second that let’s absolutely smash this exam(this is where self-belief and confidence comes into play).

During the exam I tried to constantly stay focused and I had decided to remain calm no matter how easy/tough/surprising the exam would be.

So, when I discovered that the DI/LR section was hard, pretty hard, I though let’s just gather attempts. Let’s just attempt one easy/medium set after the other and let’s just maximize as much as we can. In the end I scored 99.94 in that section and that obviously made a huge difference in the end.

To all the aspirants I would like to say that never stop believing in yourself, and keep working hard and smart.

Good luck to all. You get one life, make it count.

Are you too preparing for CAT? Have questions in mind? Clear your doubts from CAT Toppers. Post your queries in discussion forum.

Gursimran Ahuja who scored 99.83 Percentile in CAT tells how she found the key to success

What is the secret to scoring 100%ile in CAT? Know it from CAT Topper Sanuj Mittal