UKSEE Syllabus 2020: UKSEE 200 will be held in the month of May 2020. The application for the same is available now at the official website. Candidates who shall appear for the examination need to know the complete syllabus of the examination. Here in this article we will provide the complete syllabus of UKSEE 2020. Also, the exam pattern and preparation tips will be discussed. This examination is conducted for various courses like MCA, BHMCT, B.Pharma, MBA, M.Pharma, M.Tech and to second year of B. Tech. and B. Pharm, MCA programmes.

The syllabus contains 12 papers of different subjects. For different courses there are different papers, which candidate need to attend in the examination. The papers along with the subjects are as follows:

Laws of Motion: Force and inertia, Newton’s laws of motion and their significance.

Electrostatics: Coulomb’s law, electric field and potential due to point charge, dipole and its field along the axis and perpendicular to axis, electric flux, Gauss’s theorem and its applications to find the field due to infinite sheet of charge, and inside the hallow conducting sphere, capacitance, parallel plate capacitor with air and dielectric medium between the Plates, series and parallel combination of capacitors, energy of a capacitor, displacement currents.

Current Electricity: Concept of free and bound electrons, drift velocity and mobility, electric current, Ohm’s law, resistivity, conductivity, temperature dependency of resistance, resistance in series and parallel combination, Kirchoff’s law and their application to network of resistances, principle of potentiometer, effect of temperature on resistance and its application.

Magnetism in Matter: The magnetization of substance due to orbital and spin motions of electrons, magnetic moment of atoms, diamagnetism, paramagnetism, ferromagnetism, earth’s magnetic field and its components and their measurement.

Classification of conductors, Insulators and semiconductors on the basis of energy bands in solids, PN junction, PN Diode, junction Transistors, Transistors as an amplifier and Oscillators.

Principles of Logic Gates (AND, OR and NOT) Analog Vs Digital communication, Difference between Radio and television, Signal propagation, Principle of LASER and MASER, Population Inversion, Spontaneous and stimulated Emission.

Calculus: Limits & continuity of functions, Differentiation of function of function, tangents & normal, Simple examples of Maxima, Indeterminate forms, Integration of function by parts, by substitution and by partial fraction, definite integral, application to volumes and surfaces of frustums of sphere, cone and cylinder. Differential equations of first order and of first degree.

Vectors: Algebra of vectors, scaler and vector products of two and three vectors and their applications.

Statics: Composition of coplanar, concurrent and parallel forces moments and couples resultant of set of coplanar forces and condition of equilibrium, determination of centroid in simpkle cases, Problems involving friction.

(B) Animal Excretion and Osmoregulation: Chemical nature of excretory products in various animals, Physiology of excretion, Function of liver and Kidney (Homeostatic regulatory functions of kidneys), Formation of urine, Osmoregulation by kidneys.

(G) Animal Diversity: Classification of Animal kingdom (Based on Storar & Eusinger), Characteristic feature of different phyla and classes with examples.

Fruits: Dispersal of fruits and seeds

Fungi : structure description of Rhizopus and yeast and their economic importance, Fermentation.

General study of gymnosperms and life history of cycas.

Transpiration : factors and importance, Mechanism of opening and closing of stomata.

Vectors : Position vector, addition and subtraction of vectors, scalar and vector products and their applications.

Statics : Composition of co-planar, concurrent and parallel forces, moments and couples, resultant of set of coplanar forces and conditions of equilibrium, determination of Centroides in simple case, problems involving friction.

Z-transform and its application to solve difference equations.

There shall be one paper of 90 minutes duration carrying 75 marks containing 75 multiple choice questions on mathematical Aptiude, Computer Science (BCA/B.Sc (CS)/B.Sc. (IT) Level and Logical Reasoning.

UKSEE – 2020 will be conducted for nine papers with objective type questions. The candidates are required to opt papers and subjects for appearing in the entrance examination.

Papers and Subjects in the Entrance Examination 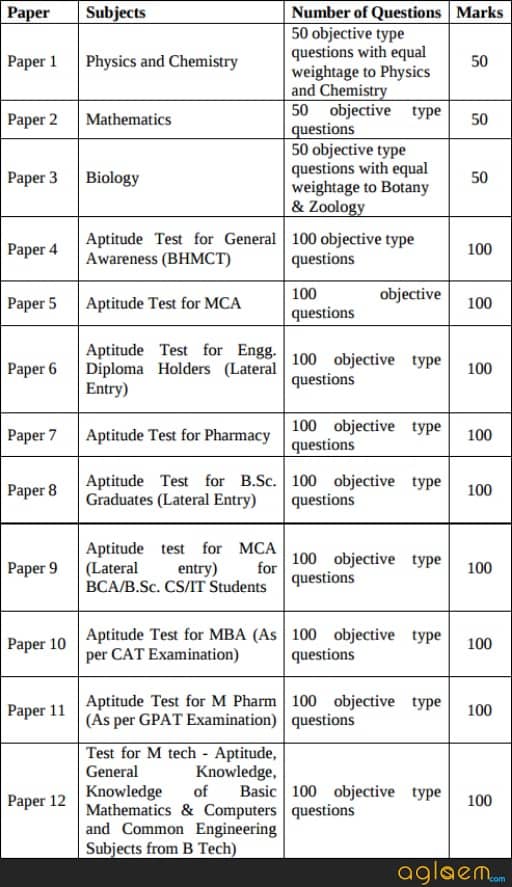 Papers to be opted for Different Courses 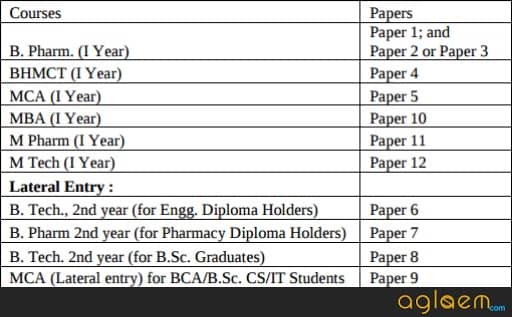