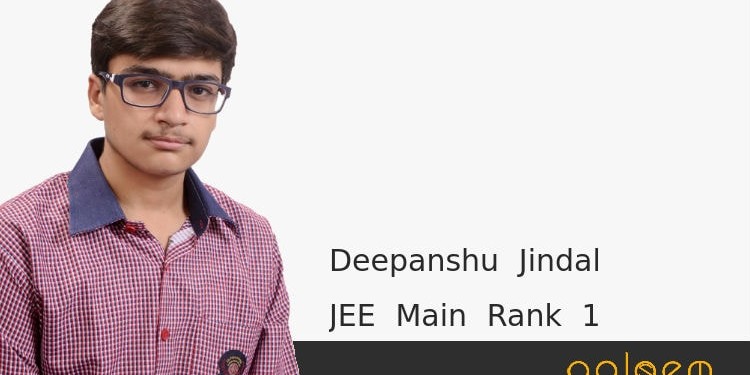 His score card reads 111 in Physics, 110 in Mathematics, and 100 in Chemistry. In CBSE Class 12 exams he scored a whopping 98.6%. JEE Main Topper Rank 1 Deepanshu Jindal credits his family members for supporting his endeavour and being pillars of strengths. In a tete-a-tete with Aglasem, a platform he has referred to while preparing for CBSE and JEE as well, Deepanshu shares useful tips for JEE Main aspirants and all other students. 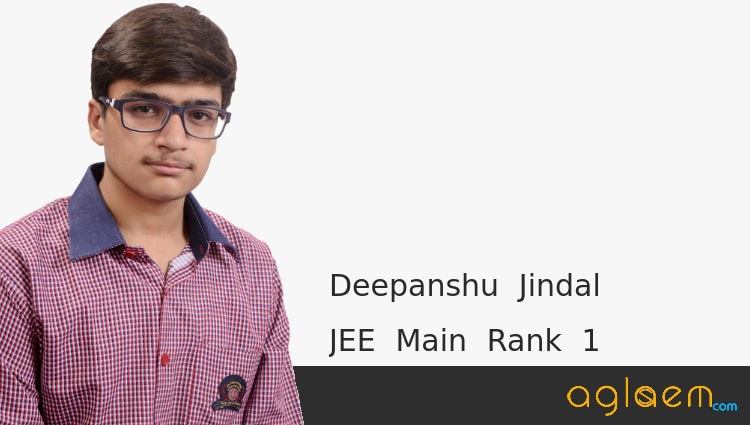 Deepanshu credits his family for his success

My father, Jai Bhagwan Jindal, is a tuition teacher while my mother, Anita Jindal, is a homemaker. My sister Ritika Jindal is studying in class 11 non-medical stream. My family was one of the biggest supports for me throughout my preparations, standing by with me all the time and making me believe that I could do it.

My mom and dad took care of all my needs and my sister was a support system apart from my friends at school.

For this JEE Main Rank 1, all subjects are his favorites

Physics, chemistry and mathematics : all were favorite , each complimenting other. Mathematics was tough but its immense utility gives it an edge.

First of all, the “Why” – Why did he appear for JEE Main

I was interested in science since childhood so taking up science in class 11 was an obvious choice.

After that appearing for JEE was an obvious choice.

Deepanshu does not believe in all work and no play. In fact he loves sports and social networking. It is in fact a myth that toppers only study all day long and are absolutely out-of-touch with real world.

I like playing cricket, football and I am also very much into social networking. I enjoyed participating in school co-curricular activities.

We asked him “How much time did you used to give to your studies on daily basis? What was your preparation strategy?”

To that he replied,

There was never a fixed schedule for me. I always kept it flexible and did what I wanted to do at the moment or what was the urgent need of the hour.

However in the last two months of prep I did became regular and clocked around 12 hours a day divided equally between the three subjects.

My strategy was simple to begin with- focus primarily on building concepts and acquiring whatever knowledge I could about the topics taught diligently by my teachers and then build up on that knowledge by practicing questions on it. I always considered science as fun so studying it was never a work. Also striking a balance between JEE prep and school is important for ensuring success in both.

In his tight schedule, he fit in social media too 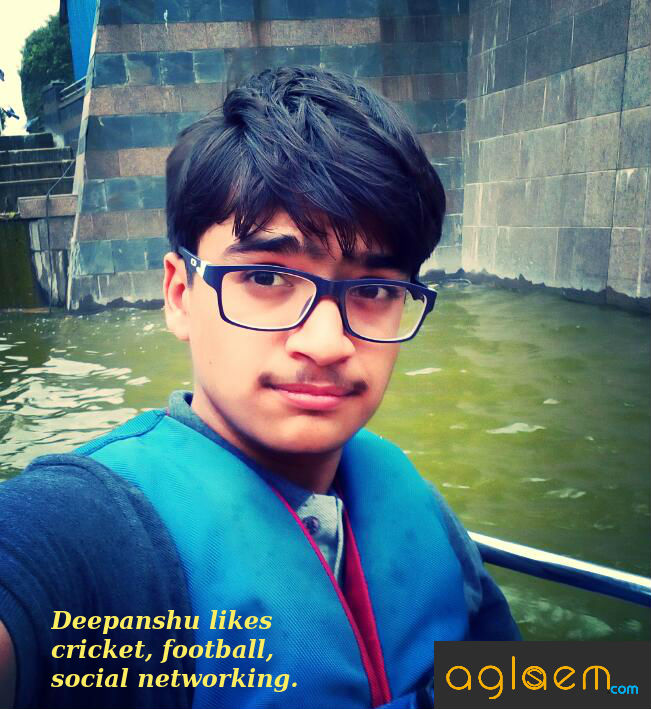 The million dollar question – How to balance school studies and entrance exam preparation?

School was always fun for me, so I ensured I never missed out there. Well, striking a balance between the two is an important work which is subject to one’s own needs and aspirations.

And obviously if you are clear with the concepts then you can do well in both.

It is important to know that among all the available JEE Preparation Books, which ones do toppers use?

I referred the modules provided by the institute. Apart from that a few books which were my favorites and really helpful were

Important of coaching for JEE preparation (?)

We asked him about having taken coaching for JEE and its importance.

Well importance of coaching is a personal point of view which varies from person to person depending on one’s needs. Definitely it brings in discipline and regularity in studies but again its not necessary for everyone.

The only thing required is a self-motivation to achieve the goal. 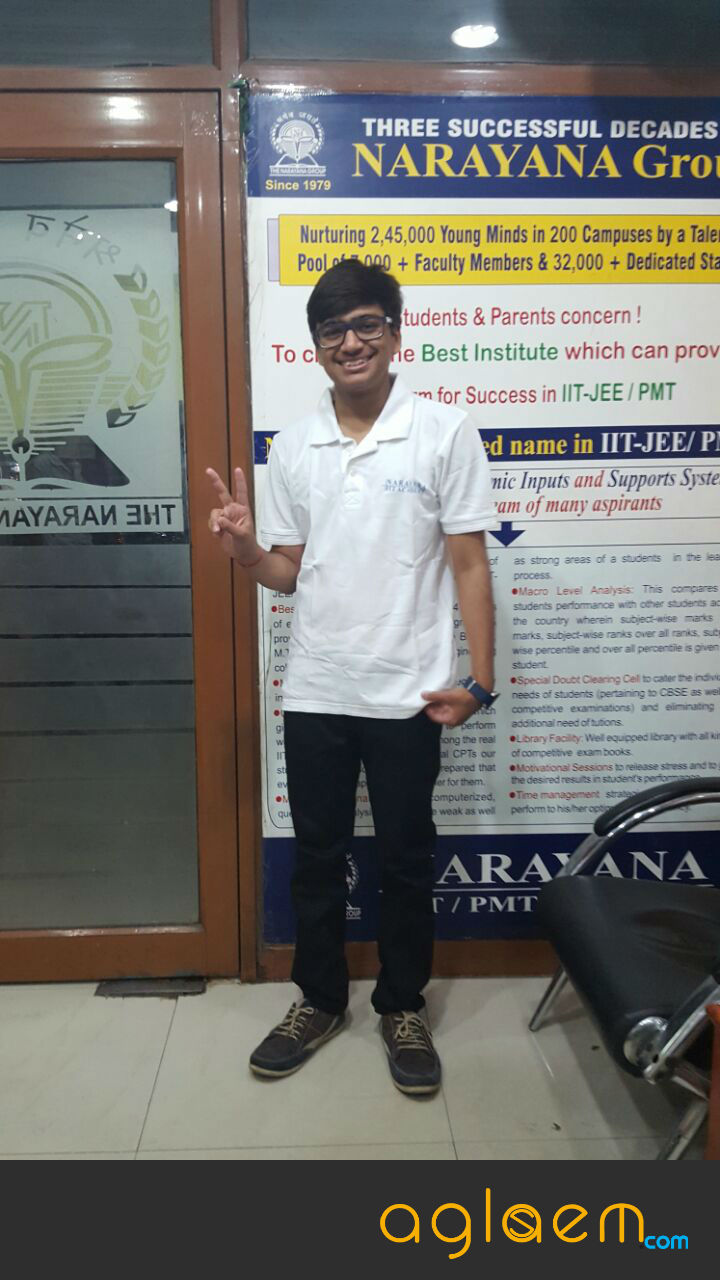 For me coaching was really helpful as the regular tests helped me assess my weaknesses and work upon them. Also my teachers and my mentor, Mr. Anurag Misra always motivated me and the classroom teaching saved me from going through many books.

Getting Rank 1 in JEE Main, and Rank 53 in JEE Advanced

We were eager to what his first reaction was after seeing result and knowing that he had topped the most prestigious exam?

I wasn’t at home when the results came and my institute director called me. Initially I couldn’t even believe what I heard. Usually I am very cool and composed and that came as a rare occasion when I was so excited.

BITSAT is a prestigious entrance exam conducted by BITS Pilani. Students work hard to get a score above 400. Deepanshu managed to get 434/450 in BITSAT.

Deepanshu is opting to go to IIT Delhi

I would be going for computer science at IIT Delhi.

After graduation I might be going for higher studies. After that I would be going for a nice job an IITiandoes . I would like to go for entrepreneurship eventually.

Everybody hates those tricky questions in JEE. So we asked Deepanshu which was most difficult question in his opinion

Can’t remember any like that, but yes I remember leaving two question in physics and one in maths advanced exam directly, and frankly speaking it was a good choice as they were a hell lot of difficult or precisely calculative.
In mains I attempted almost all the questions, some were a bit unexpected and out-of-the-box while some were just fine.

How To Succeed in JEE – Success Mantras

And also never follow everyone’s advice blindly-practice your own discretion. ;)

Deepanshu Jindal, being a gem, also had some kind words for Aglasem.

And yes really thankful to you guys!!! I have often used your website for NCERT solutions and JEE previous year questions. Keep up the good work!! Didn’t know one day I would be giving an interview for your website

This interview has been compiled by Aglasem correspondent Pranjali Rastogi.