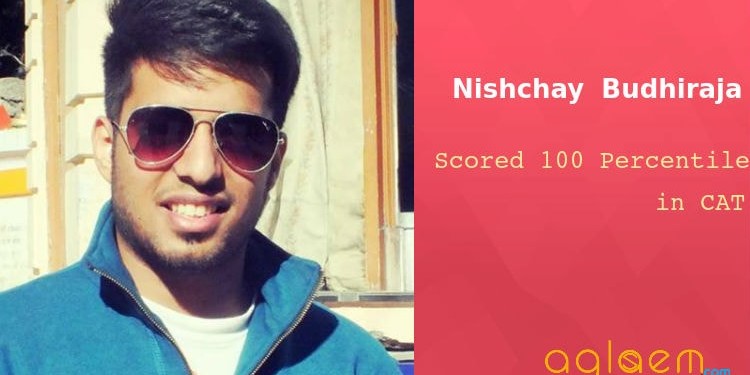 Cracking the CAT exam is nowhere near easy and getting 100 percentile is such a big deal. Perhaps not for Nishchay Budhiraja, a Delhi boy, who has scored the unbelievable 100 percentile in CAT in his very first attempt. Nishchay had a candid talk with Aglasem and shared his success story. He also revealed his preparation secrets and strategies. Read the whole interview to know more about the CAT Topper Nishchay and grab some amazing tips and tricks for CAT exam.

Nishchay Budhiraja has completed his engineering from IIT Roorkee. His parents live in the capital Delhi. Nishchay’s father is an Engineer plus MBA and his mother serves as a Vice Principal in a Delhi Govt. School. Despite being highly educated, Nishchay’s parents never pressurised him to pursue any particular career. Nishchay appreciated the support of his parents, saying

They had always focused on my education but never pressurised me to pursue a particular career. They were always supportive and motivated me to put my efforts and do well in life, not caring much about the results.

Nishchay loves to solve puzzles since his childhood which according to him has helped him to develop analytical skills. His favourite section in CAT is Quantitative Aptitude, no wonder he’s an engineer!

The stepping stone for success is the right preparation at the right time. Once the stepping stone is placed correctly, the structure of success can be built easily. CAT Topper Nishchay elaborated on how he prepared to emerge a topper. He said

I joined CL in January but started serious preparation from late June. From Jan to June, I just attended the classes regularly, but after June, I started taking mocks and studying in my room as well. On an average, I studied 3 hours a day.

As I was in college, there was not much pressure. The second last semester is relatively easier and my sole focus was CAT so I didn’t care much about the grades I got in college.

Answering about the important topics for CAT exam, he advised the CAT Aspirants “I think all the topics are equally important. One needs to focus on weaknesses more but not neglect the strengths at the same time”. He also reflected on the need of coaching for CAT preparation and said

Coaching is not necessary but it gives you a direction and you become regular towards the preparation. Taking mocks is very necessary. I had subscribed to only CL material though I stopped doing it later and focused only on mocks.

Nishchay had his goal crystal clear and to focus entirely on CAT, he didn’t appear for any other entrance test. No doubt he has hit the bull’s eye at the end.

Nishchay has achieved the applauded success that a student may achieve at this point in his/her life. You must be curious to know about the thing that pushed him forward and made him step upon the top. We asked him the same and Nishchay calmly revealed his success mantra.

Never overdo things and peak at the right moment.

On the Exam Day

We asked CAT Topper Nishchay about his experience on the day of CAT 2015 exam. Nishchay told us that he was satisfied with his attempt and recalled

I was confident on the exam day and was not nervous. The only problem was that I had the exam in morning slot and due to placement process going on in my college I had to take a test late last night and was not able to sleep properly.

I reached the exam centre before time, with 7-8 friends of mine. I made myself comfortable with the surroundings and calmed my nerves. The first section was VA and that was where I had to focus hard because I knew if I was able to score well in this section, I would be able to bell the CAT. Luckily, the questions seemed easy and I sailed through.

The second part was LRDI and I gauged the difficulty level of the exam by going through the whole paper for the first five minutes. It seemed to be fairly tough and I decided to attempt 6/8 sets. With around 6-7 minutes remaining, I was able to attempt 6 and thus tried my hands at the 7th set which I was able to do with just a minute left. I guessed the last set as there was no negative marking, thereby increasing my score by 12.

The first two sections had gone well and I was more than ready for my favourite section of the exam. The difficulty level was as expected and I used my old time tested strategy of going for all the questions in one go. I was able to attempt 32/34 in one go and guessed the remaining two.

On the Result Day

It is the best when you come to know that you have achieved for what you have been preparing hard. The same moment came to Nishchay Budhiraja when the CAT Result were declared. He expressed his delight and said

Saying that I was overwhelmed would be an understatement. I always knew that I would be able to get calls from top IIMs, but had not imagined that I would get 100 percentile. That came as a very pleasant shock to me.

After sailing to the top in CAT, Nishchay has set some more goals for himself. He expressed his interest in Finance and said

As of now, I have not yet decided what exactly I would like to do, but it is going to be on the lines of pursuing my interest in finance

We congratulate Nishchay for his magnificent success at CAT and wish him all the best for his journey forward. Keep it up, Nishchay!

This interview has been compiled by Aglasem correspondent Shivika Rastogi and edited by Lalit Sharma.

He scored 100 percentile in CAT without coaching – Prateek Bajpai