Srinidhi Prabhu Shares How He Got Rank 1 In JEE Main 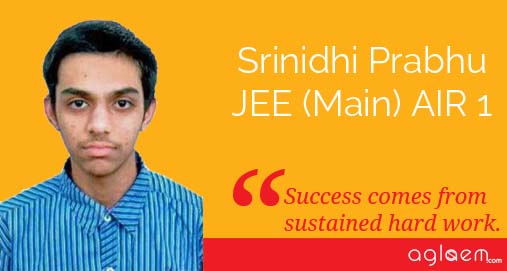 Srinidhi Prabhu topped the Joint Entrance Examination (Main) in the year 2014. He had studied 10+2 from PU College Bangalore. Srinidhi hails from Santhekatte in Kallianpur, Udupi district. Coming from a family of intellectuals, it was another feather in Srinidhi’s cap. His father Shashidhar Prabhu is currently working as finance head in  the Indian Academy of Science, Bangalore. Shobha S Prabhu, his mother, hails from Bannadi near Kota in Udupi district. She works as a scientist at DRDO Bangalore.

JEE Main AIR 1 has secured 133 rank in JEE Advanced as well. He wishes to pursue Computer Science at IIT Madras.

That’s not all, he is also among the toppers of Karnataka CET. Srinidhi Prabhu was the top ranker in Karnataka CET (engineering) by scoring 174 out of 180 marks. He scored a 60 in physics, 58 in mathematics and 56 in chemistry. 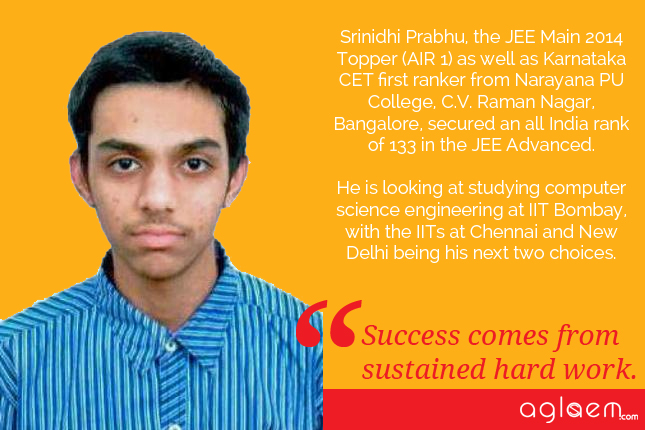 Srinidhi says that success comes from sustained hard work. He also thanks his parents for guiding and supporting him throughout the preparation period.  He also wishes to take up MBA course later.

JEE Topper will not be participating in the CSAB (JEE Main Counselling). He will only go for admission in the Indian Institutes of Technologies. His priority has always been to take admission in IITs. His hard work has finally paid off.

According to Srinidhi, his first priority was IITs, then NITs or BITs and then college through Karnataka CET. Having scored high scores in all these exams, almost all colleges are open to him. With 133 rank in JEE (Advanced), AIR 1 in JEE (Main) and Rank 1 in KCET, Srinidhi has really made his parents proud.

Future plans – Having scored high in engineering entrance exams, his next milestone is to pursue MBA from an esteemed B School. For now, he is elated with his performance.

We wish Srinidhi Prabhu all the very best in life.