by AglaSem EduTech
in Management 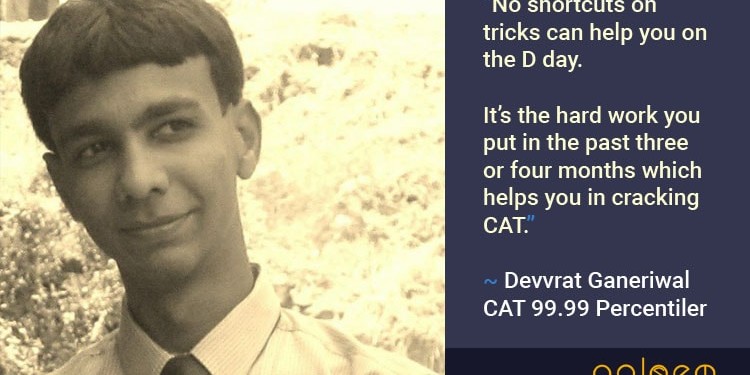 Devvrat Ganeriwal, a graduate from Vishwakarma Institute of Technology, Pune, has created history again after scoring 99.99 percentile in one of the most toughest competitive exam, CAT. Not only that, Devvrat also scored 98.5 Percentile in XAT, 98.929 percentile NMAT and went on to get 319 in GRE. We had a candid interview with Devvrat where he shared his feelings on this achievement and debunked his success secrets alongwith some valuable tips. Before that, lets know a little more about this competition champ.

Devvrat belongs to the Amravati District of Maharashtra state. His family is quite liberal and has allowed him to pursue whatever he wants, Devvrat shared. After his schooling in Amravati, Devvrat got admission to Vishwakarma Institute of Technology situated in Pune where he studied Computer Science and graduated in 2015. He has been regarded as ‘quintessential nerd’ among his colleagues.

After graduation, He didn’t take any job to give his best shot at CAT. Earlier in 2014, he scored 98.6 percentile in his first attempt.

Achieving a target does not have aforesaid recipe, its how one approaches towards it. Wondering about how he was able to achieve it, we asked about his preparation strategies and  Devvrat explained

“I started my CAT preparation in August. I generally study late night as it very peaceful and almost no one is there to disturb . I kept on giving as many mock as I can find. I made it a point to give at 3 sectional or a full mock a day. Along with that I would review previous results to find my mistakes and try to correct them in the next test. It all accounted for 4 to 5 hours a day.”

Answering about coaching institutes, he emphasized that taking coaching for CAT helps one is building some tricks and revising some old concepts. Devvrat revealed that He took AIMCAT test series which is conducted by TIME Intistitute.

When asked regarding book he referred, he replied

” Nothing in particular. Study material from any of the coaching institute covers almost every bit of formulae and provides a lot of questions to practice.”

Devvrat also shared his take on the CAT 2015 question paper and gave some important insights about the same.

“This year’s CAT was though when compared to last year’s paper. DILR section was on a harder side. Many lost hopes in that section, as a result they could not concentrate on the Quantitative section as well.” he spoke. “With pattern changing for continues 2 years it is best to wait till the pattern is out and then start actual preparations. Till then brush up some old concepts of maths. In this year’s cat RCs were given a lot of importance. It is one thing being good in English and it another to get in line with someone line of thinking and answering the question in a passage.”

“No Shortcuts on tricks can help you on the D day. It’s the hard work you put in the past three or four months which helps you in cracking CAT. Practice and practice, only practice will be better. Always look for new and quick methods to solve a problem. Check the key for the question you solved correctly too”

Devvrat shared his feelings about the day the result of CAT was announced and said ” I got to know my result around about 9.30 in the morning by checking the source code of the home page. At first I would not believe it I waited for 3 to 4 hours to confirm. At the same time I was in bliss knowing it would hardly be wrong. Finally , I received a message form IIM stating the same.”

Devvrat has achieved what many cant even think of in dreams. The happiness post the success is unmatched. We asked about his philosophy of success to which he calmly explained “For the achieving success, you have to choose a path. A firm decision about what to do and what not to is necessary. Whatever you do, they are people who will judge you, never bother about such people and move towards goal with full conviction and determination. Never compete with others. Your only and true competitor is you. Try to better yourself and you will improve.”

Never compete with others. Your only and true competitor is you.

On the Exam Day

The most important day for any competition is the exam day. We asked Devvrat about his experience on the exam day and how he controlled all the pressure and anxiety, he replied “I was nervous. Being nervous is certain. It shows that you have prepared for a long time to perform on this particular day. This was before the paper started. As soon as the paper started I didn’t bother what was happening in right or the left. The nervousness vanished with it. That three hours were like thirty minutes. In that three all I was thinking was how can I solve the questions on the screen and nothing else. All around I remember it as a good experience.”

“For me DILR section was my strength. Coming to the third set in the Data Interpretation I understood the section was tough. Moreover, I could understand that if I waste my time of that particular set, I won’t be able to complete the remaining section. That’s when I decided to skip some of the tough questions in the set and move on. That helped me a lot. I was left with 15 mins and 2 sets of questions (8 in all) I could crack one of them, second being a write in type question I decided to fill estimated values” He remembers his last minutes during the CAT.

“After doing all the hard work, don’t lose your composure at very end moment. There will question you could not answer in the exams, read them and move on.” he advised to other CAT aspirants.

After the MBA, Devvrat dreams to have his own startup. He revealed “As such I don’t have any grand plans right now. But, I have some ideas regarding one or two startups. I might end up starting one.” We also hope his entrepreneurial journey shall start soon. All the very best from the entire team at Aglasem.

This interview has been compiled by Aglasem correspondent Shivika Rastogi and edited by Lalit Sharma.

This is a part of a series of interviews with toppers of exams and boards – Toppers Speak – bringing to the fore bright young minds who will go a long way — the kind who play a crucial role in the changing world. This interview has been edited and condensed. If you have any interest in talking to us (or know someone who might), please be in touch: [email protected]

Gursimran Ahuja who scored 99.83 Percentile in CAT tells how she found the key to success | CAT Exam