Nilanjan Dutta Tells How He Scored 100 Percentile in CAT 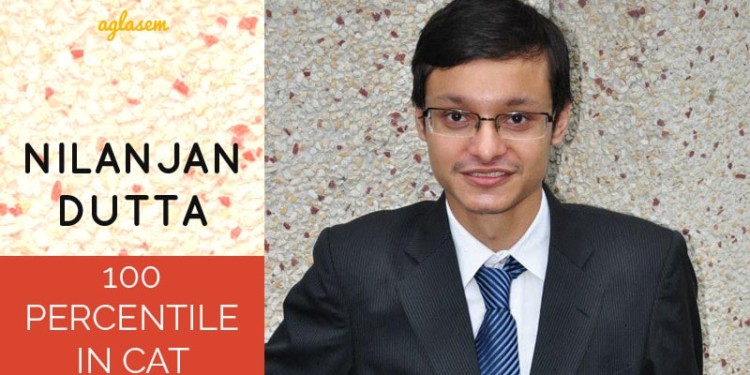 CAT Results showed that there were a handful of 100 Percentile score holders. Nilanjan Dutta is one of the few who claims to have taken the Common Admission Test for fun and also to check how sharp his skills are still.

Nilanjan Dutta already did his postgraduation from XLRI Jamshedpur. At the time of taking CAT he was working as a business consultant in an IT firm. We caught up with Nilanjan so that he may enlighten future CAT test takers on how to crack CAT without coaching.

Please tell us a little bit about your family? How did your family support you in your preparations?

I am from Kolkata. My dad is a Doctor and mother a housewife. They always supported me tremendously during my preparations. Family support is critical to the success of a CAT aspirant, for the candidate goes through a lot of anxiety and mood swings during the preparatory months and need someone to be there for them and guide through the stressful period.

What activities you were involved in during your preparation and what are your hobbies?

I have always been active in extracurricular activity. I debate on a national level and also do acting in plays. I have a knack for puzzle solving skills. I am quite enthusiastic to play football and cricket when it comes to sports.

What motivated you to appear for CAT 2016.

I attempted CAT in 2016 for the sake of testing my aptitude skills. I had not taken any competitive test for the last five years and on my friends’ suggestion, I appeared in CAT 2016 to see how sharp I am still.

Express your feelings after cracking CAT 2016.

Well, I was amazed to see the results. I never really thought of getting the full score but getting 100% really makes me feel good. I am overwhelmed after scoring full marks but also a bit disappointed towards what happened 5 years back when I scored a 99.43 overall percentile.

You are working as a Business Consultant in an IT firm and already holds a Management Degree from XLRI-Jamshedpur, then why you opted to appear for CAT 2016 ?

Well, we all friends completed postgraduation from top 10 Colleges, as I stated earlier just to check the aptitude level, where I stand was the reason behind appearing for CAT 2016. For me, CAT exam was for fun :). Getting 100% needs Luck along with the Hard work.

CAT was not a planned thing, it was just a exam I just went for. I am going to continue with my current job and I am really satisfied with that. Although, I want to take long term or short term On site assignment.

When did you start preparing for Exam? What was your routine study period? On an average, how many hours a day did you study?

In 2016 I didnt studied as much as I studied in 2011, I have always prioritized my CAT preparation. But I didn’t compromised on my extracurricular activities. Past year Mock Tests, solving puzzles and sudoko was enough for the preparation. When I attempted CAT in 2011, there was no facility of the calculator. I have to calculate in mind.

According to you how was the Exam? Which was the most difficult & easiest topic and how did you crack it?

I personally felt it was not difficult as much I got the 2nd slot. But DILR was tremendously difficult. I was able to solve 3 cases out of 8. I focused on questions for not more than 4-5 minutes. I changed my complete strategy for solving the cases. That approach really helped in the exam. I decided to use the options and recommend the same to the aspirants.

Did you take any coaching class & Mock Test? In your opinion Should students take coaching for preparation?

No, in the last 5 yrs, I did not take any coaching but focused on self-study. Previously I did take mock test and as stated earlier, I have a knack for solving puzzles and that really helped in the preparations.

Yes, one should not ignore the necessity of Classroom coaching, if you are appearing for the 1st time. Joining a coaching institute gives exam preparation a massive boost and the Motivation will remain. Shortcuts and tricks taught to solve the questions in classroom coaching are important. Self-preparation is also important.

What are the most important topics for CAT preparation that you think a CAT aspirant should focus on?

These days, a lot of candidates do not make a good preparation strategy and end up preparing for tough questions only. For verbal section, vocabulary is not much required. Read RC passages very thoroughly that comes in the exam. In English, analyzing the question is important. Concept should be clear. For DILR section, I would suggest focusing on solving puzzles, practice past year mocks and solve sudoku as much as you can!

Which books/ study material you referred for CAT preparation?

As an advice to future CAT takers, how many questions should one attempt to score well?

Apart from CAT, which all MBA Entrance Test you have appeared?

On the exam day, what was your experience like? Please elaborate upon this as it will be extremely helpful for the students.

Well, I was in 2nd slot, I tried to stay away from the discussions of the other students. In my exam center, there was a smooth process, system worked properly. We just need to carry the ID proof. I was not tensed at all it was just a fun exam for me. I was mentally prepared for the exam process.

With the new exam pattern, what should the preparation strategy be for CAT exam?

Aspirants who are not very strong as far as aptitude questions are concerned should focus on their weak areas first. In the year 2011, 45-50 questions out of 60 were to be attempted to get a good score. Even the weak aspirants, if they attempt 60 questions out of 100 they can score better.

I did was whenever I saw geometry questions, I could think of second whether I can do the question or not. Attempting 55-60 questions only, one can score 90% and for scoring 99.9% 75 questions are much more sufficient.

RC’s should be studied online because there is a lot of difference in online and offline studies. DILR can be done from books which I referred above.

What is your success mantra?

Any tips to the aspirants?

Keep yourself open-minded enough to solve the question. Attempt more and more questions and lastly, CAT is unpredictable exam don’t be pessimistic about the exam. Don’t get disheartened.

Junaid Taj Gives Tips For CAT And Tells How He Scored 99.53 Percentile