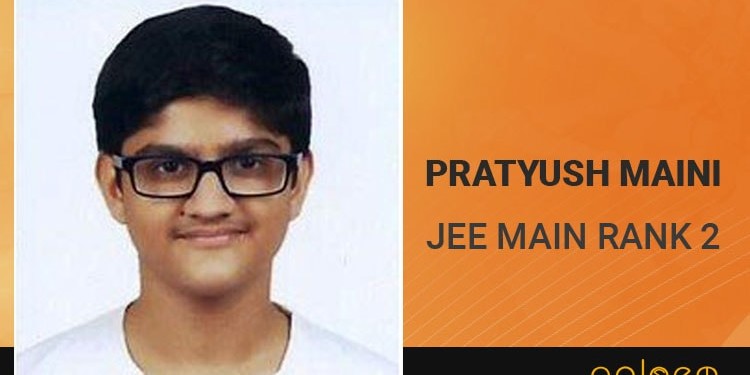 Pratyush Maini grabbed All India Rank 2 in JEE Main in year 2016. Joint Entrance Exam – JEE Main, the most coveted engineering entrance exam, was conducted by CBSE. Among the 11 lakh students who attempted JEE Main, making it to the top is a mammoth task. Meet Pratyush Maini, a boy from Gurugram (Gurgaon), who has bagged AIR 2.

We had a brief discussion with Pratyush on his success, strategy and future plans. Read on and get useful JEE Tips & insights from the Topper himself.

JEE Main Topper Pratyush has ‘engineering’ in his DNA as his father, Mr Kapil Maini, is a Mechanical Engineer. His elder sister has done English Hons from LSR College, Delhi. He thanked his family for the support, saying

Absent on most of the Social platforms, Pratyush prefers to use Quora.

Pratyush is fond of Table tennis, Lawn tennis and Cricket as well. He believes playing them helps him de-stress after hours of study. 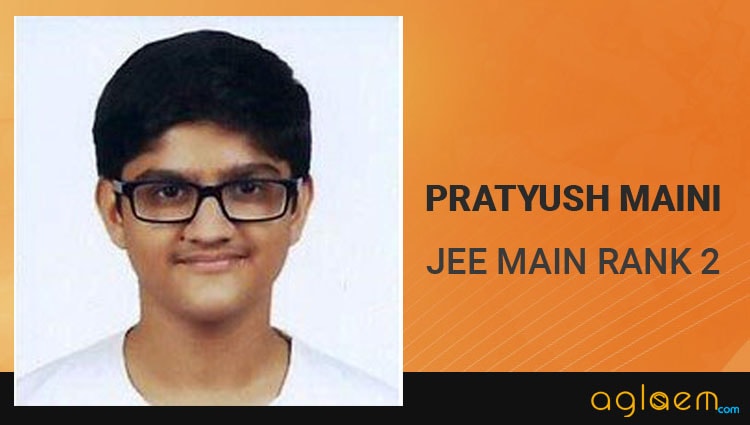 How he prepared for JEE Main?

They say ‘What you sow is what you reap’. The efforts put while preparation reflects clearly in the Result. JEE Main Topper Pratyush had a well-planned preparation strategy which he shared with us.

My preparation strategy was first to clear the basic concepts and then practiced questions based on them. I also took a lot of mock tests and practiced from sample papers as well as last year’s question papers. This way I recognised my weak areas and converted them into my strengths by focusing more on learning concepts.

I was focused on solving more and more questions and took help from my Teachers for any doubts.

Long study hours and continuously skimming the books can prove to be hectic, Pratyush agrees to this fact. He believes one must study sincerely and effectively, no matter if it is only for few hours. He justified his study hours saying,

On an average, I would study for 4 to 5 hours in a day. However, a month before the JEE Main exam, I studied for around 8 hours daily.

Enjoy your studies and give your 100% in everything.

Most of us have conflicting views on the importance of Coaching for competitive exams like JEE. On one hand, it provides helpful mentors to vanish the doubts while on the other hand, it takes away a lot of time decreasing the self-study hours. Pratyush has attended coaching from FITJEE Gurgaon and stands in favour of coachings. He explained his point,

Yes it is quite important to join coaching classes as there is a tough level of competition where everyone wants to score high. My mentors helped a lot in clearing my basic concepts.

How does it feel to Top the JEE Main?

On top of the world, one must say. Pratyush also had a similar story to tell. He was surprised to enter the top three as he was expecting his in rank close to 50. He recalled the joy of success saying,

I was very happy after seeing my result. I was not expecting to be the second highest scorer. I thought I would be among 50. My hard work has been paid off well.

After getting into the Top 3 in IIT JEE Main, Pratyush is looking forward to take admission to IIT Bombay or Delhi in Electrical Stream. We hope he cruise to more heights in his career and life. Aglasem wishes Pratyush the very best for his future.