Check all the live updates on DU 2nd Cut Off 2019. All the cut-offs which are releasing are available here:

18:00 PM: Second Cut off DU Janaki Devi Memorial College is out now, check here the full list of cut off.

17:45 PM: DU Second cut off of Vivekananda College has been released, Get here

17:11 PM: Now the second cut off list of Satyawati College and Mata Sundari College for Women has been released.

16:40 PM: DU Second Cut Off 2019 for SRCC College has been released. Admission in B.A (Hons) Economics is closed, check here.

15:55 PM: DU Second Cut Off for PGDAV College and Gargi College has also been released.

03:00 PM: The DU Second Cut Off 2019 for Shaheed Sukhdev College is now available. You can check it from here.

12:24 PM: The Vice President of India, Shri M. Venkaiah Naidu, said that boards which issue the results in grades must also simultaneously provide marks so that the percentage obtained by the students could be calculated by the respective universities. 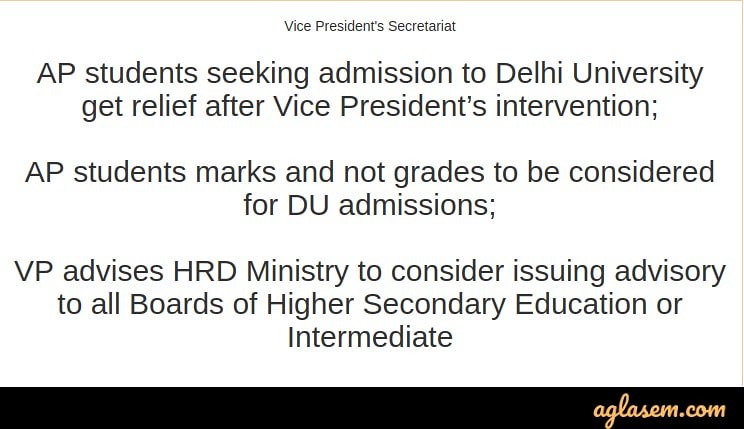 11:44 AM: As per newspaper reports, it is highly unlikely that the 2nd cut off list for Kamala Nehru College will be released for the unreserved category in courses such as History, Geography and Sociology Honours.

11:10 AM: Few professors from DU have suggested that there shall be a decline in the DU Second Cut Offs for courses where seats are still left would see a marginal decline of 0.25 to 0.5 per cent while the slide might be in the range of 1.25 to 1.5 per cent for Hindi and Sanskrit, since there have been very few admissions.

10:40 AM: Many students withdraw their admission from one college and take admission to another college if it is of their choice or the course is of their preference. Hence, more college would be watchful in the second cut-off list.

09:00 AM: It is said that maximum seat at Delhi University is filled by second to third cut off list.

Students can check the revised dates for the release of DU Cut off 2019 from below:

The University of Delhi prepares the cut off for merit-based courses by considering factors like the number of registration received, highest class 12th marks for each board, average class 12th marks in each board, number of seats in each college an course, etc. Now, candidates should note that as the DU cut off releases, the cut off keeps getting low. Most of the seats in the courses and colleges are filled in 1st two or three cut-offs.

Top 10 Courses for DU Admission on the basis of registered candidates are:

Candidates can check all the DU Cut Off 2019 for all the rounds using the direct link provided in the table below.

If you are looking for DU Cut off for a particular college, you can check it from the direct link below.

The University of Delhi was established in 1922. It is a public central university and is one of the best institution of higher learning in India. There are more 90 colleges affiliates to the university, which provide UG, PG, and M.Phil / Ph.D courses. It is a member of Universitas 21, Association of Commonwealth Universities, and Association of Indian Universities.

As per reports, it one of the largest universities in the nation, with 16 faculties, 90 colleges, and 86 academic departments. There are more than 130000 students registered with DU, of which 114494 for UG course and 17941 for PG course.