by AglaSem EduTech
in GATE 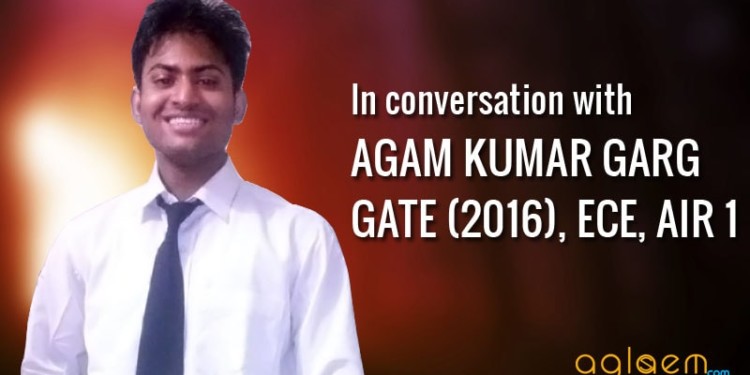 Agam Kumar Garg, the only son of the family who filled the GATE 2016 with an aim of securing an AIR under 100, has shown the world how hard work pays off by securing AIR 01 (ECE). Agam completed his engineering from IIT Guwahati and came to Delhi for GATE preparation. Now his eyes are set on IES exam as he wishes to join PSUs. Agam shared his story of touching AIR 01 this year from AIR 267 in GATE 2015 with us, also revealing his little-known secrets and preparation strategies. Read his full story and take away some great tips.

Agam hails from a small family living in Hindaun City, Rajasthan . His father is a lecturer and his mother is a housewife. He also has a younger sister who is currently studying MSc. When asked about family support, he said “They have always told me to have confidence and patience”. With his family always at his back, he prepared hard and the rest as they is history.

Agam had studied in IIT Guwahati completing his B.Tech in ECE. He says his favorite subject in college days was Communication. He recalls how he used to read Communication System Engineering in the library at college. He also appreciated the effort of Faculty at IIT Guwahati who, as he said, are very knowledgeable and experienced. Praising the college’s campus, Agam said “IIT Guwahati has one of the most beautiful campuses. It is all covered with greenery has lake inside the campus. Just outside the campus, mighty Brahmaputra is flowing”.

Learn from your mistake and don’t repeat them . Have faith in yourself.
Agam Kumar Garg

The quest for GATE began for Agam as he wanted a good Government Job in PSU. As most PSU recruit from GATE score, he attempted for GATE in 2015. Being good at academics, Agam secured AIR 267 in ECE. Recalling that time, Agam said “In GATE 2015, I got 267 Rank but couldn’t get any call from any PSU except CEL and BBNL. In ECE branch if you are looking only for job through GATE and not getting rank below 100 rank then there is no meaning of appearing in GATE exam. Keeping that in my mind I filled GATE 2016 form”.

For the GATE preparation, Agam landed in Delhi after his completing B.Tech. He joined coaching classes for planned preparation. He believes “If you did well in your college and if you have good knowledge of your subject and practicing questions then there is no need to join any coaching class. But if you are struggling with the subject then it is good to join coaching class.”

“Mock tests are very important. They will help you to know in which areas your mistakes can be possible” he continued.

In answer to the question most difficult topic he proclaimed “Digital communication and Random Process”. He used to watch Nptel lectures to understand the subject. “For Random Process I solved so many problems still I found them tough” he added.

He also listed some of books from which he has prepared for GATE 2016. If you’re also preparing for GATE exam, you must have a look at these.

Also there are very good video lecture available on YouTube of Oppenheim Sir. One can also try Nptel video lectures.

When asked about the most important topics according to him, Agam clarified “I think in GATE there is equal amount of weightage to each topics so each topic is important but there are some topics which seem tough to students and asked most of the time like in communication digital communication and random process. You should never leave those topics specially which are simple and scoring like Control System, Digital Electronics and Math.”

A lot of students were worried about the Computer Based Test introduced in GATE exam. When we asked Agam about his opinion, he suggests “It might be a little worrisome for some people who have spectacles and got headache and lose concentration during the exam due to continuously sitting in front of the computer for 3 hours. Except that I think it is pretty good”

“It omits the errors people usually commit at the time of filling OMR bubbles” he added.

Agam shared that his exam center was at Jaipur. We asked him to describe the scene at centre, to which he explained “When I reached at the Centre there were lots of students standing there. Some were looking tense some were studying from their books and some were too relaxed like me. I had one thing in my mind that if I got tensed or worried about the result I would definitely do many mistake. I talked with my neighbors sitting on either side of me to remove nervousness before the exam”

To become a topper it takes hardwork, intelligence and most importantly the strategy in the exam hall as that is what actually decides the fate. Agam shared his strategy of attempting the GATE 2016 exam, revealing “At the time of exam I used the same strategy which I was using during the mock tests like first approached English and aptitude portion then jumped to 2 marks question gave maximum time to them and finally attempted 1 marks question also I didn’t give much time to those questions I was facing difficulties”

Agam exclaims about his happiness on the day when results for GATE 2016 were announced, he recalls “Actually, I was sure that I will fetch very good rank but AIR 1 is like dream come true. As I saw the result, I was very happy even couldn’t sleep at night.” Well, we believe the sleepless night is worth all the happiness and the success to follow. We wish Agam Kumar Garg all the good luck for his future goals and ambitions.

Interview coordinated by Pranjali Rastogi, and compiled by Lalit Sharma.